In the central courtyard of the Mar del Plata Club Náutico, which is suspended from the Pole, flags of 12 countries are thwarted, represented by 730 participants. On the Playón, at the end of the day, more than 200 Optimist boats turned upside down on trailers look like white pieces of a giant puzzle, a figure that fits perfectly because it is difficult for organizers already have to make room for everyone in an new appointment.
This 54th week of yacht is a real party that has had another positive fact since last Sunday: the accompanying time and the good winds used in the four designed squares, the three in water and again in the interior mirror of the local port.

"Every day we have almost 800 people in the water", confirms Roque nóbile, captain of the Club Náutico Mar del Plata, an institution that, together with the Argentine Yacht Club, organizes this event, which is one of the four most important in the country. 'one of a kind at sea

- This is considered a category 50 for the world sailing, the parent company of sports sailing, and qualifies for the maximum tournaments. 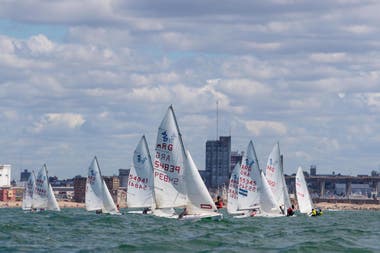 Nóbile says that the week was too small for them because if the seven-day plan is satisfied (this Saturday), keel boats will start fighting, in smaller numbers but with a very flashy display.

Optimist beginntLaser standard, laser radial, laser 4,7, 420, 29er, 49ers, Moth, F18, Snipe, 2.4 Mr, Cadet and Waszp are the categories represented in this issue and beyond the desire for a podium the added value of 'meeting between different generations from a dozen countries, with almost 300 children and adolescents in the Optimist category, have a mandatory scale to learn this sport.

Tomás Stengel is 11, coming from the federal capital and attending this Marplatense event for the first time, which means he is sailing at sea for the first time. "It was very nice, but also difficult, because there were gusts of 18 to 22 kilometers per hour," he says of winds that could not beat these boats more than 2.4 meters long and 1.10 meters wide. Real walnut shells with sails.

His second experience is Lucas Emtrala, who is 9 and completed training after last year's race. "At that time I got very nervous, now we are learning and we are calmer," he said of the fruits of training and the added difficulty of adapting to the whims of the sea. 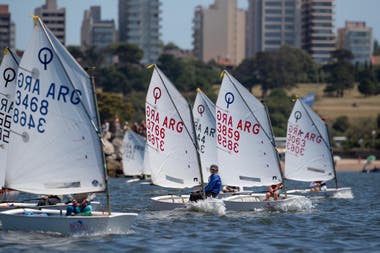 At age 13, Lucas mones also had his first time in Mar del Plata, after a test in the United States where he finished second in the optimist. "Here there is a sea more Racel, with more waves, it is complex", recognizes from this experience, which contributes to the competitions that a bigger boat shares with his father.

Alfredo Agote, 14, prefers and enjoys the challenges of this open sea. Martín Barletta, 15, keeps the river that they enjoy almost the whole year, the framework for their learning and browsing experience. Both have seven participations in this international week of the Mar del Plata Yachting. "The smell of salt worries me already, it conditions me," admits Barletta, who feels uncomfortable at this level. It contrasts with the Lude of its partner in the 420 category, which enjoys the dynamics of the ocean. "The waves are all funnier," he says
In addition to being able to compete and share with each other, this date allows you to broaden the knowledge beyond the contribution of the coaches themselves and the experience of walking on each pitch. And the participants will have the opportunity to listen to Santiago Lange, Olympic sailing champion and source of wisdom beyond that discipline. Because this is what this event is all about: competing, sharing and above all learning.

As the saying goes: “Hospitality is making your guests feel at home, even though you wish they were". So please treat the place and the building neighbours as you would do your own.

With your budget in mind, it is easy to plan a chartered yacht vacation. Companies often have a fleet of sailing vessels that can accommodate parties of various sizes. You may want to make it a more intimate trip with only close family. There are charters that can be rented for as few as two people.

It is important to choose a hotel that makes you feel comfortable – contemporary or traditional furnishings, local decor or international, formal or relaxed. The ideal hotel directory should let you know of the options available.

If it matters that your hotel is, for example, on the beach, close to the theme park, or convenient for the airport, then location is paramount. Any decent directory should offer a location map of the hotel and its surroundings. There should be distance charts to the airport offered as well as some form of interactive map.

The 2019 Classic Yachts Challenge Series will include the following ev...

Superyachts are nice and all, but most models value form over function...

In view of the 2018 maritime week of the United Arab Emirates, the org...

Artifact, a hybrid of superyachts with an environmental approach

The German shipyard Nobiskrug presented in detail the artifact hybrid ...

With the SEA DNA999, the concept of the Greek shipyard is proposed to ...

The Fort Lauderdale International Boat Show (FLIBS), one of the most i...

The Italian yachts that will mark the year 2019.

News Yachting Italian yachts that will mark the year 2019 with Yachtin...

Premium Japanese car company, Lexus, has revealed the design for its u...

Ritz-Carlton will start its luxury cruises at the end of 2019.

In the fourth quarter of 2019, the Ritz-Carlton Hotel Company will cel...

BOATS AND YACHTS RENTALS BETWEEN INDIVIDUALS

Are you looking for discoveries, unusual journeys, a new experience or...

You like to spend your holidays with your friends, it's the opportunit...

How much does it cost to rent a boat for a weekend?

Cannes Yachting Festival 2018: The Biggest yacht show in the Mediterranean!

Boat Vacations: The 10 things you need to know to rent and Charter.

is a sailboat or a catamaran better? Can you take a shower on board? B...

27% sales growth for Sanlorenzo Italy If the last boat from Dusseldor...